Building on Bruce's trivia question about Jackie Gleason and Richard Boone often traveling through Hamlet on Seaboard's Silver Meteor and Silver Star, I have another celebrity trivia question.

Many people are aware that the Duke and Duchess of Windsor also once traveled through Hamlet on the Silver Meteor.

The question is who were these British royalty and why would they choose a Seaboard train to travel from Miami to Washington, D.C.?
Jody Meacham
HHS Class of 1969
Top

Jody, I remember hearing some of the old guys talk about the Duke and Duchess of Windsor but that was a little ahead of my time. They said, and I read somewhere, that they were very frequent travelers on the Orange Blossom and Meteor due to the excellence of service on these two trains, but were very tempremental and really a pain in the rear. Everyone had to bend over backwards to please them, especially the dining car staff and Pullman car attendants.
Top

Don't remember the specifics, but believe she was in line to be Queen of England and gave that right up by marrying an American named Wallace Simpson. This is just my recollection. Suppose I could google it for more detail.
______________
Lynn Steen
HHS Class of '60
Top

Aaah, those ol' sloughed off brain cells do make us forget. My memory of the two Lynn wrote about is that he was in line to be king and she was a divorcee by the name of Wallis Warfield Simpson. The part of being divorced put the kibosh on Edward taking the throne. (I didn't google this, just took it off the top of my remainig brain cells.)
Bruce Osburn
--We live so long as we are remembered... old German adage.
Top

King Edward VIII gave up the throne in 1936 in order to marry
a divorced American socialite named Wallis Simpson in 1937.
Upon his abdication he was given the title Duke Of Windsor and
she became the Duchess Of Windsor. They lived in retirement
in France for most of the rest of their lives. During World War II
Edward served as Governor of the Bahamas. It was during
that time that the couple used Seaboard trains for trips to New
York and Washington.
Top

Right. King Edward VIII gave up the throne to marry Wallis Simpson. Wallis Warfield Simpson to be precise, an American from Baltimore. She is the key to why they would take a Seaboard train, and that's the second part of the answer.
Jody Meacham
HHS Class of 1969
Top

Jody are you saying the fact that Wallis' uncle S. Davies
Warfield (1863-1927) chairman & President of the Seaboard
Air Line Railway from 1918 to 1927 might have had some
influence on her choice of the Seaboard?
Top

Indeed I am. I would not be surprised if the Duchess of Windsor was one of the Seaboard's major stockholders at the time, meaning she owned [a part of] the train.
Jody Meacham
HHS Class of 1969
Top

I remember the little community of Warfield, VA. We had a siding there and it was listed in the employees timetables as Warfield.
Top

The land on the southeast corner of Raleigh & Charlotte streets
after the Seaboard Annex Hotel was demolished in 1925 was
named Warfield Memorial Park in honor of the Seaboard president.
Southern National Bank (now BB&T) was built on this property.
Top

Really interesting reading what you all have posted on this subject. So much I had not heard even though so many in my family worked for the Seaboard. My grandpa Clemmer could have been the conductor on one of those trains. To bad there is not a book written tying in these and other Hamlet / Seaboard facts to our history. Now if we just knew someone who was a writer.........Jody, do you know of anyone ??
Top

Trying to figure out the Duke and Duchess real relationship besides their family trees is a real challenge. I even tried googling it and couldn't make heads or tails out of their marriage as far as the family trees went. The Duchess was definitely the dominating factor as far as the royalty factor goes, but trying to trace the blood lines is like trying to untangle a backlash or "birds nest" on a fishing reel. I do agree that the Warfields were a big factor in the development of the SAL RR and like Jody said, she probably owned half the trains of which they rode. LOL.

As Alan said, someone should write a book on this subject, and I nominate Jody. So what if he should make a few mistakes, who's going to know the difference. LOL !!!
Top

Here's an Associated Press picture from 1941 showing the royals at the Seaboard station in Miami. Note that the caption, which I've pasted below, describes the 8-year-old girl holding the Duchess' hand as Warfield's niece but ignores that both were his nieces.


Sandra Southerland, 8, is with the Duke and Duchess of Windsor at Miami on Sept. 24, 1941 after she presented a bouquet to the Duchess for all employees of the Seaboard Railways. Sandra is a niece of the late S. Davies Warfield, once president of the line. (AP Photo) 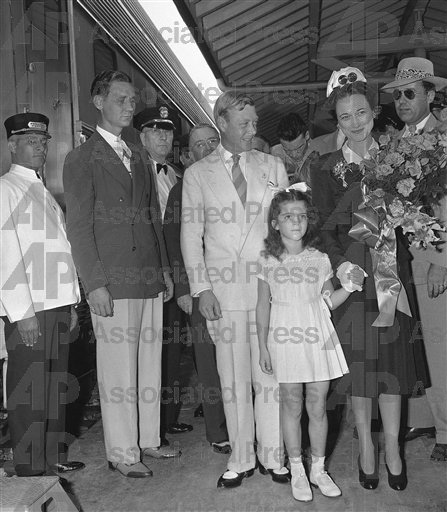 The difference in American and British opinions about King Edward VIII's romance with Wallis Simpson and his abdication to marry her is striking.

In the United States their story was treated as the fairy tale of a commoner -- though a very rich one -- and the king who gave up his throne to marry her. And many Americans were offended that the British public didn't feel the same way, no doubt because Americans saw their objections as a rejection of an American as unsuitable to be part of their royal family.

The British did, in fact, consider Simpson as an unsuitable bride, but not so much because she was an American. She was rich, twice divorced and considered as a lightweight character who loved and flaunted her ability to live the good life. Though that also describes the royal family, the British feel that what the royals owe their subjects in return for their castles and ceremonies is the duty to serve in the roles they were born to -- that is, you were lucky enough to be born to inherit the throne, so you will damn well sit on it and do your public duty until God strikes you dead. Edward VIII, from that perspective, failed in his duty to his country.

But there was one other factor that made Wallis Simpson unpopular in Britain. The public there more clearly saw the coming war with Germany than the U.S. public did in the 1930s.

Hitler's rise to power and his scapegoating of Jews for Germany's economic problems following World War I found a lot of sympathy among the wealthy in both America and Britain, and Simpson was regarded as a Nazi sympathizer. The royal family was torn because its members had been under suspicion since WWI because they were, in fact, descended from German royalty. In 1917, even before the end of WWI, Britain's King George V changed the royal family's name from its original House of Saxe-Coburg and Gotha -- the region of Germany they came from -- to the House of Windsor.

Shortly after the abdication, their marriage and what was, in effect, their exile to France, the Duke and Duchess visited Adolf Hitler in Germany in 1937 over the objections of the royal family, as shown in this photo. 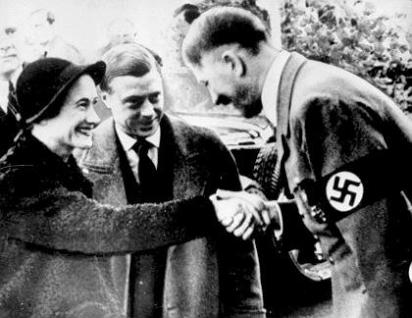 Hitler was already reviled by the British public at this point, and they blamed the Duchess and her alleged support of Hitler for insisting on this embarrassing visit. Americans, not yet paying too much attention to Hitler, didn't pay much attention to this visit, either.

One of the reasons the Duke was appointed governor of the Bahamas was to tie him down to a job away from Europe and Hitler.
Jody Meacham
HHS Class of 1969
Top

Watch the movie The Kings Speech...it as some facts about there relationship.
A great movie that came out last year I believe.

This as been so interesting to read your posts. Never thought about famous people coming through Hamlet on the train!
Top

Janet, I, too, thought of "The King's Speech" when writing about this. The man who became king when Edward VIII abdicated was George VI, the movie's central character, Edward's younger brother and the father of the woman who is now queen, Elizabeth II.

One of the things the story about the king's abdication illustrates is how a relatively small decision -- in this case a decision of one person to marry another -- can have so many unforeseen consequences. Queen Elizabeth, the second-longest serving monarch in more than a thousand years of English and British royalty, would never have become queen without that abdication.

There's no way to know what would have happened in the world if the line of royal succession hadn't been shifted by the abdication -- especially during World War II -- but the Duke and Duchess of Windsor never had any kids. Elizabeth is a strong believer in the British tradition of serving as monarch until death, so her son, Charles, who is 64 and the heir to the throne, may serve only a very short time as king if he serves at all.

By the way, my wife's best friend from high school in Charlotte now lives in Virginia and is married to one of the Maryland Warfields, who is very active in Republican politics, including working as spokesman for Robert Dole when he ran for president.
Jody Meacham
HHS Class of 1969
Top

I think David needs to create a "like" button! Hint, hint!! Another interesting tidbit Jody. Thanks for sharing. Marcus' daughter is in England for the second time studying at Kent. She so loves British history and reels off all the monarchy and successors. I told her she needed to read all these posts.
Top

I saw the new movie "Hyde Park on Hudson" earlier today. It's the one with Bill Murray as Franklin Roosevelt and takes place mainly during a visit by King George VI and Queen Elizabeth to Roosevelt's family home on the Hudson River in New York in 1939.

These were the royals who took the throne when George's brother abdicated so he could commute with Wallis Simpson on the Silver Meteor, and they were the parents of the current QE2.

The purpose of the visit -- the first by British royalty to the United States -- was to enlist Roosevelt's support for Britain in the war with Germany that the British public and Roosevelt knew was coming but that the U.S. public was blind to. One of the reason's U.S. support for Britain was iffy at this point in history was that Americans were offended by Britain's dislike of Simpson and the fairytale love story Americans thought she represented, and it's covered pretty well in the movie.

This movie also touched on King George's stuttering, which was the central focus of "The King's Speech," Roosevelt's efforts to build the king's self confidence as monarch and the public relations effort to repair British-American relations after the abdication by serving the royals hot dogs at a picnic.
Jody Meacham
HHS Class of 1969
Top
Post Reply
19 posts • Page 1 of 1

Users browsing this forum: No registered users and 1 guest